Download Avidemux, Video Converter Software. Avidemux to edit and convert videos. Avidemux is a video editor that lets you cut, merge, convert, filter and encode media files, and other functions which will be discussed in detail. Support various video formats like AVI, MPEG, MP4 and ASF, MOV and OGG and a variety of video codecs and audio. Convert between formats, eg DivX to VCD, AVI to MP4, and various combinations more.
It offers tools to improve video quality by applying filters to the image, and correcting flaws such as a mismatch between sound and image. Moreover, it can reduce the file size, having lower image quality, but with the possibility that the video can be recorded in a smaller disk space. It also includes a tool used to extract audio from the videos, which you can then save as a music file.
The tool has to cut videos is very intuitive as it has a WYSIWYG interface to instantly see how changes are being applied to video editing. Obviously it has the inverse function, able to join two or more videos in AVI format for a single file. 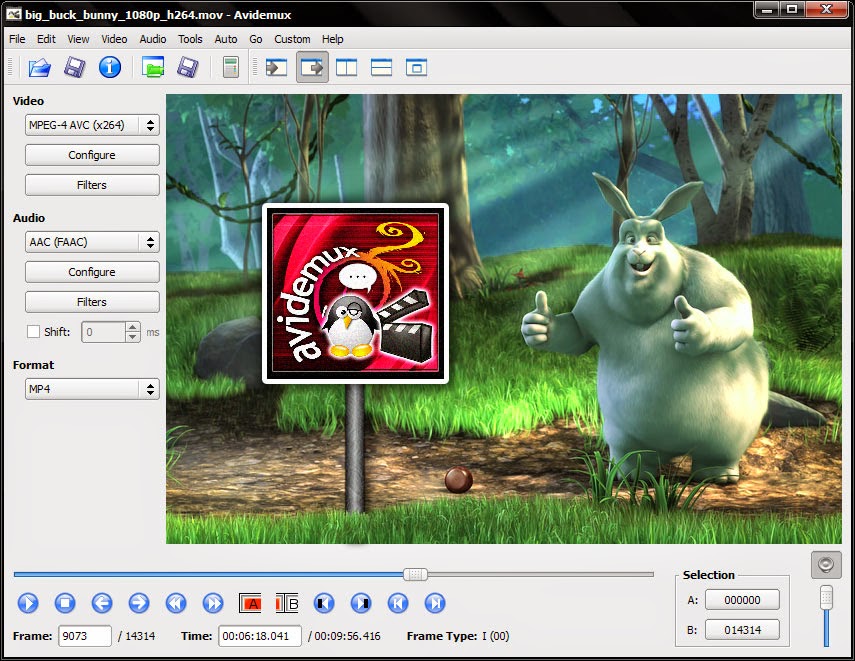 Another tool included in this application is able to resize the image, either stretching or shortening the number of pixels in both width and height. Avidemux can be used to increase speed or to decrease it in case you want to apply an effect of "slow motion" (slow motion); to achieve these changes should change the framerate, ie the number of frames per second that has the original film.
It has several other tools, such as one that serves to add and edit subtitles, with several options for customizing the fonts and colors of text, with the possibility of adding a background of another color, if necessary; providing an option called "auto split" that, if marked, will divide each phrase so you can watch completely on screen. For each subtitle should define the number of consecutive frames that will remain visible, therefore can be used to leave a logo or brand always visible throughout the entire video. Undoubtedly this is a very complete application, which competes with another program we've already recommended, such as VirtualDub. Avidemux 2.6.8 is the latest version of this open source software is available for Linux, BSD, Mac OS X and Windows under GNU GPL, free.
DOWNLOAD SOFTWARE:
Download Avidemux, Video Converter