Kanto Player Download - Record Your Karaoke Songs. Kanto Karaoke is a player that can be used as karaoke as it has several specific functions for this, for example, to remove the singer's voice and keep only music. Supports various audio and video, has options for converting files, and allows you to record songs while singing, among many other features offered by this software. Kanto Karaoke. Like other similar applications (eg VanBasco), Kanto has several options for customizing the visual aspect, whether fonts, colors, backgrounds, sizes, location onscreen lyrics, etc; disposing of various skins with different designs.
This program supports the formats of karaoke KAR, MID, CDG and MP3, plus it is possible to upload videos where you can add lyrics is displayed as the song plays, so that the user can read and sing. It can convert MIDI to MP3 or KAR to MP3, among several other options, with the advantage of better sound quality is obtained, while preserving the lyrics of the songs in the same MP3 file (obtaining an MP3 early to karaoke ). To keep the letters must check the "Preserve Lyrics" box. 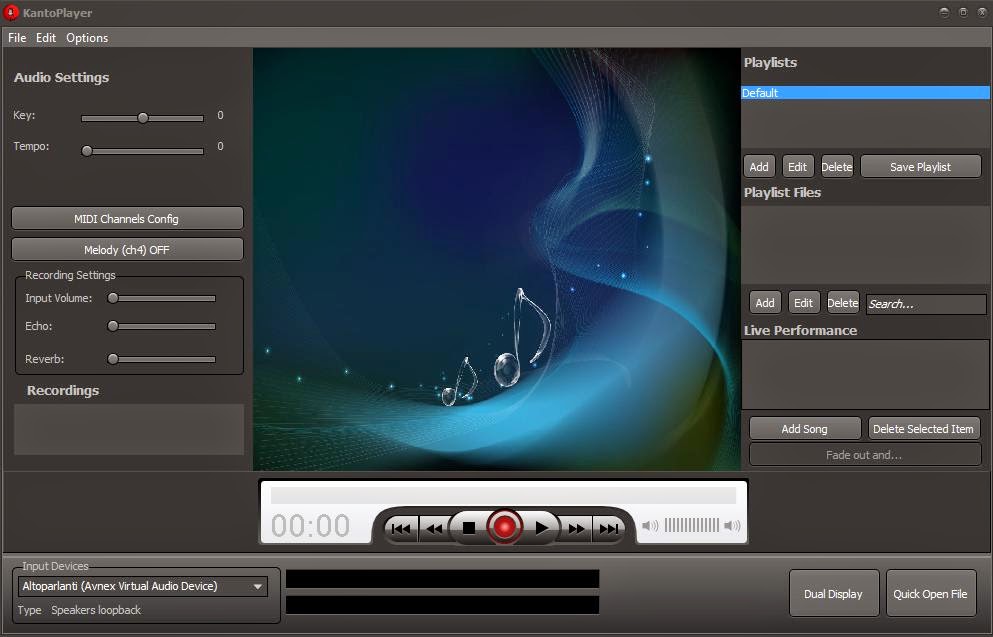 Kanto player offers the option to create playlists (playlists) to spend several songs in a row, with the possibility of eliminating silences or abrupt transitions through the crossfade effect. It requires a microphone to record voice with background music. Getting songs that can be saved in MP3 to share on social networks, YouTube upload, or just to listen and correct pitches in successive notes vocalize, enhance the bass, etc. The recording process is very simple as it reaches to press the red button on the interface Kanto, and if the singer wishes you can add effects (chorus, echo, reverb) to its interpretation.
This player-recorder features advanced functions, eg Midi channel manager; and configuration of various settings, eg pitch and tempo editor (to change the speed and pitch of a song). This software is very comprehensive, but this free version has some limitations with respect to the complete edition (in its variants Professional or Personal), mainly in what concerns the number of songs that can be added to a list, or the number of minutes that can be recorded.
You can try the limited edition smoothly (no need to purchase the full edition) or else you can opt for any of the alternative classics in this genre, such as Karafun or VanBasco (which are very good, but long which have not been updated). Kanto player works for Windows XP, Vista, 7, 8 and 8.1.
KANTO PLAYER DOWNLOAD SOFTWARE:
Download Kanto Karaoke Player, Record Your Karaoke Songs
Insurance, Loans, Mortgage, Attorney, Credit, Lawyer, Donate, Software, Conference Call,