Kodu Software Download. Kodu is a visual programming environment for creating games for PC and XBox, aimed at children and young people without experience in development, because it has a very intuitive and easy to use, fully comprised of icons representing various actions. This programming language provides tools and libraries for specific games, which offer the user the freedom to design and program their own applications using various scenarios, in addition to conditions and actions that should be associated with the controls on the XBox or the keyboard and mouse of computer.
The aim of Kodu is not that children learn to program and you do not even need to write code, but to become familiar with a visual environment where they can use their full imagination and creativity to develop animation models to follow a certain applying logic programming basics. The development environment provides a set of interaction options that can have the player, whose corresponding icons should be associated with the event WHEN condition (when), and in turn provides a set of actions which icons should be associated with event execution DO ( do). An example might be: 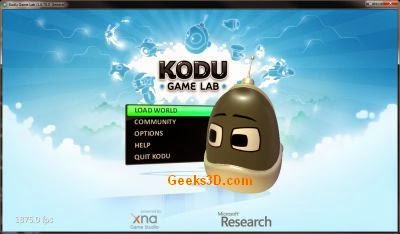 This ruling will mean that when the user press the space key on the keyboard will cause firing a projectile. A set of such sentences are shaping and gameplay to an application. There are icons to determine the direction, frequency, speed and other parameters, in this case a shot, but also applicable to any other action that should make the protagonists of the game. Kodu Software, itself includes examples and tutorials for those who start using the tool. Resources can also be found on the official site or browse YouTube videos looking for tutorials.
There is a similar Kudo software, called Scratch is also highly advisable for children to begin developing applications playful type, but which in turn proves an entertaining experience where express their creativity and enhance their ingenuity. Microsoft Kodu Game Lab 1.4.61.0 is the latest version available for Windows XP, Vista, Windows 7 and 8.
KODU SOFTWARE  DOWNLOAD:
Download Kodu Software Link