ManyCam Free Download. Manycam is a program that lets you use the web camera (webcam) into multiple programs at once, for example, by videoconference program Skype, AIM, Yahoo Messenger, Paltalk, and Camfrog. It can also be used during a live broadcast Twitcam. The novelty of this tool is that you can add special fun effects, such as: overlay masks on the face of the person, or add wigs, hats, mustaches, bulging eyes and other objects by other originals. You can also apply distorting the voice, to impersonate another person. You can also add fixed or moving text, and background images, which can be chosen from a gallery that includes fixed and moving landscapes with different backgrounds, for example, a snowy place, with falling snow or rain.
The effects are very well made, and also in this latest version a drawing tool, able to further increase the creativity with which you can decorate the backdrop during a videoconference is incorporated. A new feature that incorporates ManyCam is the ability to record sessions with all the effects that have been applied. The videos can be captured and saved in various formats, including HD (high definition).
During a session is possible to Broadcast "pnp" (picture in picture), which allows to show in a smaller window for a movie or a presentation that accompanies the main table that looks to the person transmitting. This application also allows you to record gaming sessions, either during an online match in any RPG, while playing Minecraft or any other program, then save or share the video on social networks. In this video you can see some examples of how the applied effects on a person seen as the web camera is used. 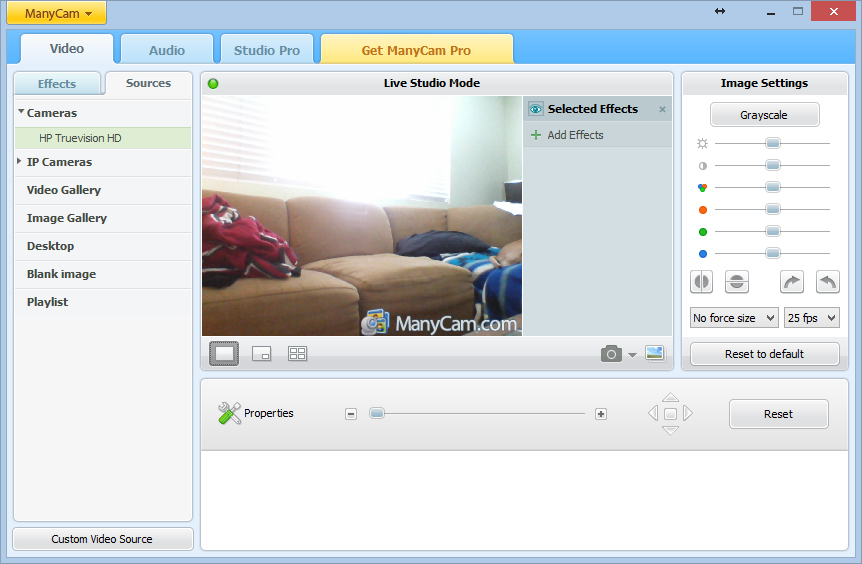 Download ManyCam Free. To learn how to set ManyCam as the application that you want to associate, it has a set of tutorials that explain step by step. This software can be downloaded for free, with the option to change later to the Pro version with additional functions version.