OOo4Kids Office Download, Word Processing For Kids.  OOo4Kids an office for children. OOo4Kids (OpenOffice.org for Kids) is a program based on OpenOffice office (similar to Microsoft Office but free program), but with the particularity of being aimed at children (7-12 years old). With respect to the original edition is streamlined and has an interface (buttons, toolbars, menus) suitable to make it easier to learn and to make it more attractive to children.
You can configure the user level between beginner, average or expert, according to the user's age and experience with these applications. When using school level, the teacher is the one who should advise what level to use for their students. This project was made possible by EducOOo, who kept the profits from the original package; contains a processor similar to Word text (OOo4Kids Writer), a tool for working with leaves similar to Excel spreadsheet (OOo4Kids Calc), a tool for Powerpoint presentation type (OOo4Kids Impress), another for drawing and editing photos and pictures ( OOo4Kids Draw), and finally one for applied mathematics, including a formula editor. 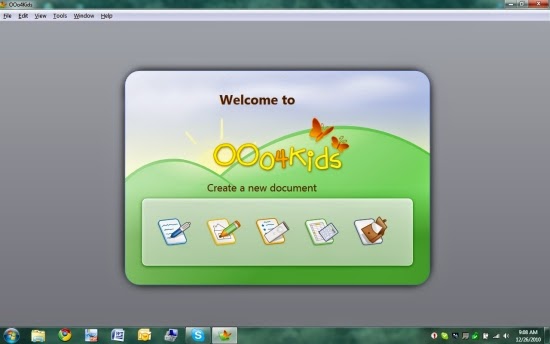 This package contains other useful tools, for example, to convert the edited documents into PDF Writer. It also has advanced drawing tools, ideal for creating all kinds of diagrams, with the possibility to insert symbols, arrows, blocks, and so on. It gives schools a tool for learning calligraphy and several other utilities that can be incorporated through extensions, eg, dictionaries for other languages.
OOo4Kids 1.3 is the latest version, updated in December 2013, this imperative to take the tablet computer or software, and specialized for children, which can be downloaded free. It is available for various platforms (Windows, Linux and Mac OS X) and for multiple languages ​​(including Spanish). On the download page should be chosen for the language row ("es" for Spanish) and between columns should choose the operating system, Windows arranging for an installable version and a portable.
DOWNLOAD SOFTWARE:
Download OOo4Kids Office