Download Samsung Kies 2.6.3 and 3.2. Samsung Kies is a program used to connect Samsung phone to PC, such as the Samsung Galaxy or the Wave and the latest models with Android, among others. Allows 2 modes of connection between the computer and mobile: wireless via Wi-Fi or through a USB cable. Kies lets you synchronize your phone with your PC, transfer files, create backups; manage, edit and convert videos or pictures taken from mobile to see on the computer, and many more features. To take advantage of OS updates of cell phones, you need to update the firmware to the latest version. Kies is responsible for checking if you have the latest update, and download and install if necessary.
Samsung Kies for PC is an alternative to Samsung PC Studio but adds some options like access to applications developed for Samsung and download; but lacks other who does have the PC Studio, such as sending SMS. In the event that you connect the device not recognized (usually for Windows 7), you should try to select the option "driver recovery".
Samsung Kies 2.6.3 (2.6.3.14123.5) is the latest version, updated in January 2015, which you can download free. This new version 2.6 has a redesigned interface and several new features, including the ability to sync the contacts with Gmail or Yahoo, automatic format conversion, and presents several novelties. 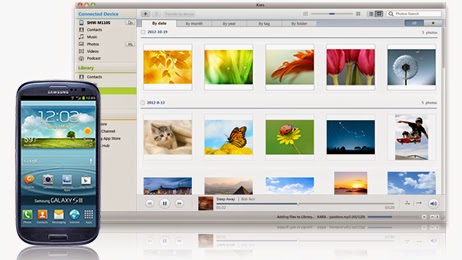 Download Samsung Kies 2.6.3 and 3.2. Works with Windows XP, Windows Vista and Windows 7 (32 and 64bit). A Core 2 Duo 2GHz processor and 1GB of RAM minimum for proper operation of the application is recommended.
ATTENTION: It's launched Kies 3 (version 3.2.15013.17) version to connect to models of phones and tablets with Android 4.3 (or later) system, for example for Galaxy Note II or newer models. It has a manual Kies in Spanish, which explains in detail the following: how to synchronize contacts, how to synchronize music and video, updating the firmware, adding contacts, and the steps to perform backups.
KIES DOWNLOAD FREE:
Download Samsung Kies 2.6.3
Download Samsung Kies 3.2