Start Menu WINDOW 8 Download. Start Menu 8 to add start menu to Windows 8. Start Menu is a program that adds the classic start menu of Windows to the latest operating system from Microsoft, the Windows 8 instead of the new screen (known as Metro). This application adds the start button to display the menu that users are aware of Windows XP, Vista or 7.
Start Menu 8 allows you to switch easily between Windows 8 and Metro traditional desktop interface, with the possibility of access to programs, files, documents and control panel quickly, mainly those users accustomed to using the desktop interface meanwhile they get used to the new interface mode, or until they have a touch screen. Other options presented this program, and allows the screen to jump start consist disable the sidebar and the Metro Hot Corners (corners) features of Windows 8. The application allows you to customize some aspects, for example, to select the key to use (the default is the Windows key) when you want to move from the Metro interface to the desktop interface and vice versa. Another element that can be customized is the picture shown on the start button on the bottom left of the screen. 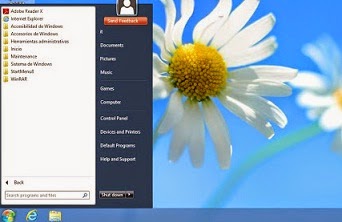 8 Start Menu 2.0 is the latest, updated in November 2014, this program is no longer exclusive to Windows 8, 8.1 and Server 2012 (32- and 64-bit) version, it now allows customization previous editions of the operating system (Windows 7, Vista and XP). Free of virus and advertising is, and can be downloaded free. To have Start Menu 8 in Spanish you should get the translation file and copy the folder called languages ​​(or Languages). Subsequently to be changed in English by Spanish for the language option.
NOTE: During the installation process Start Menu8 the user is offered to install another application of the company Iobit, called Advanced System Care, which serves to clean and optimize your system, but you can disable this option if not interested in trying it.
DOWNLOAD SOFTWARE:
Download program Start Menu 8
Download translation file utility