TinyUmbrella Download , iPhone Version Restore. TinyUmbrella is a program that lets you restore an Apple device (iPhone, iPad, iPod Touch, Apple TV) that is unlocked by the process known as Jailbreak, which allows the user to install unofficial apps that are not necessarily in the App Store. There are several reasons why an iPhone user would be interested in restoring the device firmware to the previous version, thus undoing the jailbreak has been applied. These reasons may be some flaw in some of the functionality of the phone, the inability to use certain applications, loss of warranty, to test the new iOS that you can not yet be made jalibreak and then return to the previous version, security reasons, etc.
Precisely TinyUmbrella is able to bring the iPhone to a previous state to jailbreak, through a process that performs downgrade without trace modifying the kernel of the operating system iOS without iTunes perceive it and therefore refused the operation.
The procedure is to save SHSH certificates locally on your PC or Mac via "Save SHSH" option. Then start the TTS server with the "Start TSS Server" option (must close and then open iTunes previously that starts the server). Subsequently Now you can select the firmware you want to install on the iPhone or other Apple device you want to restore. 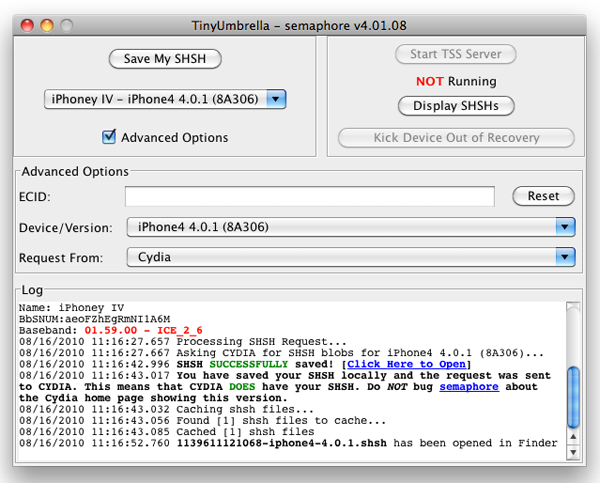 Download TinyUmbrella, iPhone Version Restore. This software is also used to exit recovery mode (recovery mode) iPhone, and to do this, press the "Exit Recovery" button after selecting the device from the menu that appears to the left of the screen. Then we let a tutorial video on how to save your SHSH files. TinyUmbrella 7.12 is the latest version for Windows, which you can download and install for free, as well as for Mac OS X.
DOWNLOAD SOFTWARE:
Download TinyUmbrella, iPhone Restore for WINDOW