Balabolka Download - File Converter Software. Balabolka speech synthesizer. Balabolka is a program that converts text to speech, able to read web pages (HTML), Word documents (DOC and RTF), books in PDF and other sources. Allows read documents written at the time by the user or copied from another source, using Notepad or any other editor.
The reading of texts that makes the application can listen while the text color will change to indicate where to go. You can also record this reading in several audio formats: MP3, WAV, WMA and OGG, allowing any player can open the audio. This program can be useful for people with visual problems, costing them read text directly on the PC monitor. It may also be useful to learn languages, appreciating the correct pronunciation of words in a text. The tool supports multiple languages: American English, British English, Spanish, Italian, Portuguese, French, German and Japanese, among others. 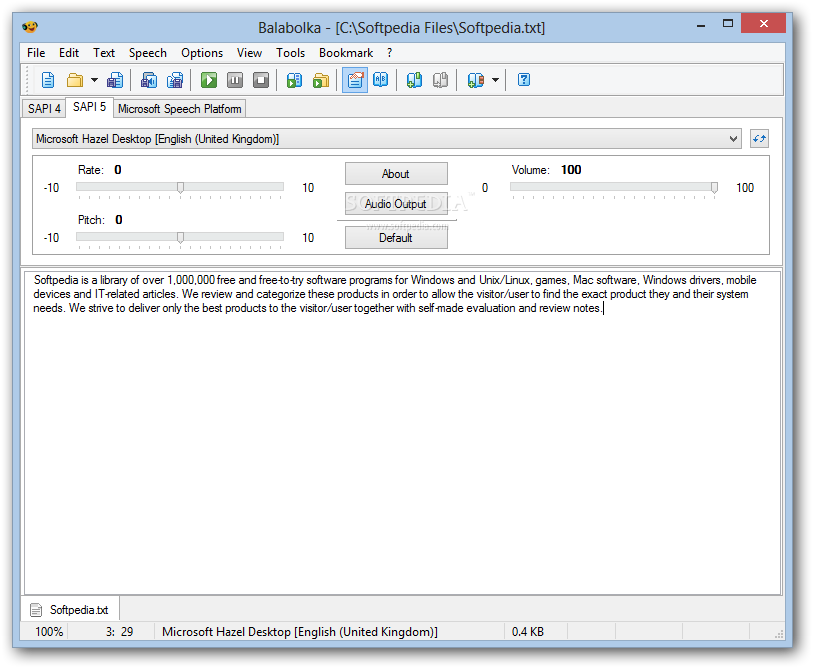 On the homepage there are links to the voices in different languages. In Spanish it has a voice called Isabel, which can be downloaded from the official website of the same application (Seek "RealSpeak TTS Voices (free voices)" and download the file for the Spanish language). After downloading and installing Balaboka, you can add this voice, for it must unzip the file and run RSSolo4Spanish.zip RSSolo4SpanishVirginie.exe. In the menu select: Options -> Voices: Isabel (Spanish) or ScanSoft Isabel_Dri40_16kKz.
Isabel, like other voices for other languages ​​belonging to RealSpeak, and voices are free, as are also the voices of Lernout & Hauspie TruVoice. There are other commercial voices of better quality as NextUp.com, Acapela Group, AT & T Natural Voices, SVOX, among others. Balabolka 2.10.0 (2.10.0.576) is the latest, updated in December 2014, this software for Windows that you can download free version.
DOWNLOAD SOFTWARE:
Download Free Balabolka