RKill Malware Remover Software Download. Stop fake antivirus with RKill. RKill is a program used to detect malicious processes and services (malware) not detected by conventional antivirus because they are just able to stop the execution thereof or overlooked. A typical software detected by RKill case are known as Rogue or FAKEAV, which usually are fake antivirus but can also pretend to be some other kind of tool, such as cleaners, optimizers, antispyware, codecs for watching videos, etc. Usually these programs are installed inadvertently or are part of some kind of false advertising.
While the most popular antivirus such as Avast or AVG (among others), are able to detect such malicious files, you may encounter new variants that can not be advised until a future update their databases of virus . This malware is able to detect and kill those processes or services to stop running. 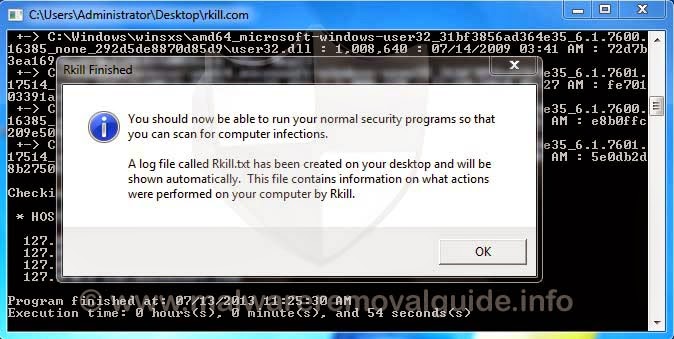 Download RKill Malware Remover. It is important that you understand that Rkill kills processes but does not eliminate the virus, so if the computer is restarted, these are going to run again. What it is achieved when braking processes these fake applications than conventional antivirus is able to reassume its action and can handle delete after an analysis of the system. After running Rkill and analyze the system, a file that is saved to the desktop where the results of the analysis are detailed, with a list of processes completed, the service ended and suspicious Windows Registry entries that have been obtained be eliminated.
After completing the analysis and generate the report will advise the user can now run the antivirus normally, so any suspicion that the antivirus is not working properly or can not be opened, this utility can be a good solution to clear doubts and repair problems should have been infected by malicious file (trojans, fakes, etc.). Suspicion must also be generated when the computer too slow when the browser home page changes when you change the search engine default, or some other abnormality is noticed. RKill 2.6.8.0 is the latest version available for Windows 10, 8.x, 7, Vista and XP. The file simply running low (not installed). It is a product developed by BleepingComputer, who offers it for free to download.
DOWNLOAD SOFTWARE:
Download RKill Malware Remover