Plustek SmartOffice PL1530 Scanner Driver. In the range with 48-bit color depth unfortunately there is little choice and because with all evaluated A3 scanners was some big deficiency (partly in the reviews), it should be this not yet rated device. Purpose was the best possible scanning of photos that are only available as a paper template. Unfortunately, the new condition was catastrophic and leads here in part to my deduction: The disc had numerous dirt spots and (maybe adhesive residue?) and had to be cleaned first seeeehr laboriously. Without the Hama graphite pen for lenses that would have taken even longer. The Plustek SmartOffice PL1530 driver installation was quick and the developer's web site is not very user-friendly, but it was enough for fast driver discovery. However, the scanner software offered NO 48Bit color depth to me. The solution: With programs like Photoshop's go. However, only with the TWAIN connection, for which in turn the 32bit version is necessary, because the 64bit variant of Photoshop offers no support. The interface looks like it's from the 90s, is terrible to use, but it works. Also in batch scan. Which is super handy, because as fast as the scanner may be at low dpi: as soon as you screw it up to 2400 dpi and add the 48 bit color depth, then the whole surface takes 30 minutes, if not longer.

Since it is quite convenient that you feed the scanner once (for example, with many small pictures, which are then written to individual files and you do not have to cut them individually) and then also has enough time to do something different. As far as the quality is concerned, I have little comparison possibilities, so it can be completely wrong. But I am very satisfied with the scans. As I said: I have no possibility of comparison. But the shots are as sharp as the originals give it, or if you take the dust as a benchmark, this is crisp. And it's annoying because it's very hard to keep such a large area dust free. But the scanner can not do that. The Plustek SmartOffice PL1530 colors are good over, in the neutral scan, the whole thing is a bit darker, but I think that's very important, so that the bright areas still contain enough information. I do not use the buttons on the scanner itself, because then I would have to go over the unspeakable scanner's own software. But they work too. In terms of volume, I always ask myself why scanners make any noise at all and, above all, why they make loud noises. This one is not louder than the smaller scanners I know, but it bothers me anyway. For A3 scanners are big and ugly per se, this is amazingly chic and looks robust. All in all, I am so satisfied that I will not look around (Scanner has been in use for a good month now). 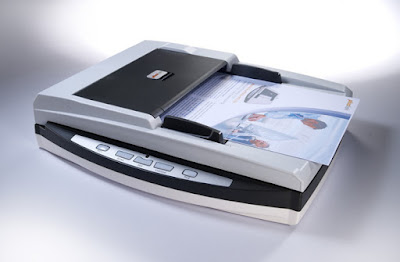