Plustek SmartOffice PL2550 Scanner Driver. With the SmartOffice PL 2550 scanner, Plustek now has another scanner for office use with two scanning units in its program. The device replaces a combination of a separate document scanner and a flatbed scanner as an all-in-one solution. However, the resolution is not high enough to produce high-quality photo scans. In most offices, both document stacks in A4 format and templates from, for example, books or magazines for digitizing. In general, therefore, two devices are needed, namely a document scanner, the thick template stack efficiently, so quickly and independently, works off, as well as an additional flatbed scanner. The Plustek, on the other hand, is a practical all-in-one alternative, with the emphasis on document processing as well. Because the flatbed unit with 600 x 600 dpi (interpolated: 1,200 x 1,200) is designed to meet the requirements of everyday office life, and nothing more. For high-quality photo scans, such as enlargements, the device is unlikely to be suitable. The purpose of the flatbed unit is to scan the media, which is not processable by an automatic document feeder (ADF) document scanner, into a solid quality.

The Plustek's ADF, on the other hand, can feed paper originals up to 5 millimeters thick (with a maximum grammage of 106 gr / m²) and plastic templates up to a thickness of 0.8 millimeters. The maximum capacity is 50 sheets, whereby the device is duplex capable, that means it can digitize front and back independently. The output, in turn, is up to 25 pages per minute (200 dpi) a solid performance, so that larger document sizes are quickly removed from the table. As expected from an office scanner, the scans can be converted into Office documents via OCR software or stored as searchable PDFs and stored on a server or sent via the network. Operation is very convenient thanks to one-touch buttons, which can be assigned the most frequently used functions. In addition, Plustek equips the scanner with a bundle of image editing, text recognition and business card management software. Of course, the device is also TWAIN and WIA compatible. In the Plustek portfolio, the new scanner replaces the Plustek SmartOffice PL 2546, which is technically very similar to its successor. The differences between the two devices could therefore only be found in a detailed comparison test, but based on the data sheet, this is currently not possible. 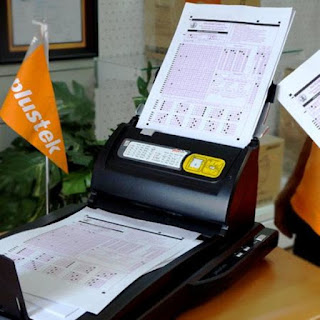