Plustek SmartOffice PS286 Scanner Driver. The really best scanner I ever had. Plustek SmartOffice PS286 is reasonably small when you fold him, he scans superfast, he scans pretty much everything you have. From the double-sided A4 sheet to meter-long receipts, a text recognition runs almost in real time over it. It is possible to further process or convert scanned documents. Really mega stapled the device, I scanned all my folders within a week. This Plustek SmartOffice PS286 scanner is part of every office. Works just fine. Settings are getting used to at the beginning, but if you got used to it you do not want to miss the scanner anymore. Absolute buy recommendation. I wanted to reduce my paper economy at home and got myself this scanner. Due to the very high price, I hesitated, but then the curiosity won. Unpacked - connected - software played on the calculator and go! I'm thrilled.

This scanner works so fast and well that I have not regretted the investment so far.  It is one thing to strive for the paperless office, and quite another thing to achieve that goal.  With the Plustekp, I have come a great deal closer to this goal. From today's point of view, I would even say that without such an assistant, this is impossible. In mountains of business cards, no problem. Scan through, save in Outlook, in OneNote, the cloud or other folder? No problem, is ratz, fatz done! Documents for travel expenses? For the tax office? etc. No problem! Scan, determine the place and finished! Rarely has it been so much fun to assign evidence. The desk looks already much emptier, we come forward, my Plustek and me. The Plustek SmartOffice PS286 is also extremely handy, the enclosed software useful in my opinion and the device very easy. From me a 100% recommendation! 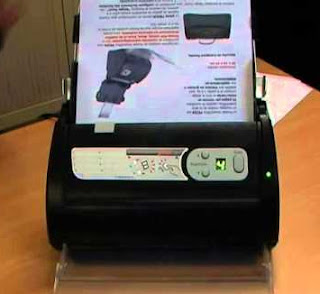