Plustek SmartOffice PS406U Scanner Driver. The two ultrasonic sensors monitor the loading of the inserted documents on the SmartOffice PS406U. Their job is to prevent double sheets from being fed by mistake. By the way, Plustek's new document scanner does not differ in technical terms from its SmartOffice PS406, which is about one year older. The capacity of the automatic document feed of the Plustek can be used even more carefree in the future. Batch processing of up to 100 sheets (depending on paper thickness) is controlled by ultrasonic sensors that detect the respective grammage of the original. The scan is said to make even more reliable with the new integrated technology, which is not new on the scanner market, but has been proven in other models as it avoids the risk of double-sheet feed.

This is all the more important as the document scanner is generally designed for a relatively high throughput of up to 4,000 templates a day and can also provide a high scan speed. According to Plustek, it processes up to 40 A4 pages (or 80 images) per minute at 200 dpi (b / w, gray, color) or 300 dpi (b / w), that is, at the resolution conventionally selected for documents. The media width ranges from business cards over plastic cards up to a maximum thickness of 1.2 millimeters to templates of size 220 x 356 millimeters, ie slightly above A4. Restrictions must be accepted in the grammage, because that may be with the Plustek at a maximum of 105 g / m² (minimum: 50 g / m²). For standard scanning tasks, the Plustek can also be operated directly on the device without complicated instructions. Settings for optimizing the scans are made via an attached software. Also included is a TWAIN driver for inclusion in document and image management applications, as well as searchable PDFs. The power consumption in turn is in stand-by mode with less than 0.5 watts very limited, which also applies to the operation (below 24 watts). 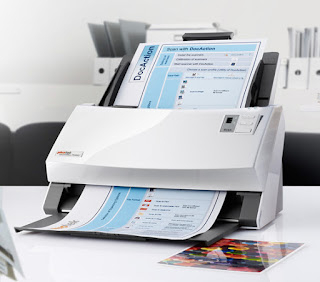