Plustek SmartOffice SN8016U Scanner Driver. Admittedly against the Fujitsu ScanSnap IX500, Plustek SmartOffice SN8016U does not exactly win the Design Award, but in technical terms it's simply superior in my opinion. I have a direct comparison because I have a part of my scripts with a Fujitsu ScanSnap IX 500 scan and have now ordered this Plustek SmartOffice SN8016U, which gives me much better results. The Duplex detection is ever the first where the Plustek has the nose in front. Multi-page documents which suddenly become double-sided from page 26 are no problem for the Plustek but the ScanSnap ignores them. The next is the possibility to scan directly to a USB stick. Terrific.

One more point is that provide which are equipped with color-backed texts are top readable. With the ScanSnap these were very dark so that the text was barely to be read. Another plus point is that Plustek devices have no problem communicating with Linux. I use Window 10 on different devices. The Plustek SmartOffice SN8016U scanner has practically three pre-programmable keys where can be determined where and how to scan. Then the price which seems fair for the quality. Have fun with it. The only drawback is the part that scans so fast that one has to do his stuff to refuel and yes even just 600 pages in an evening to pass through are not difficult.. 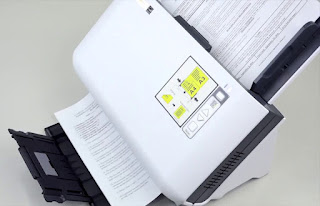